Baltika Brewery is the second largest brewing company in Europe and the leader of the Russian beer market with over 38% market share. It is headquartered in St. Petersburg and owned by the Danish brewing company Carlsberg 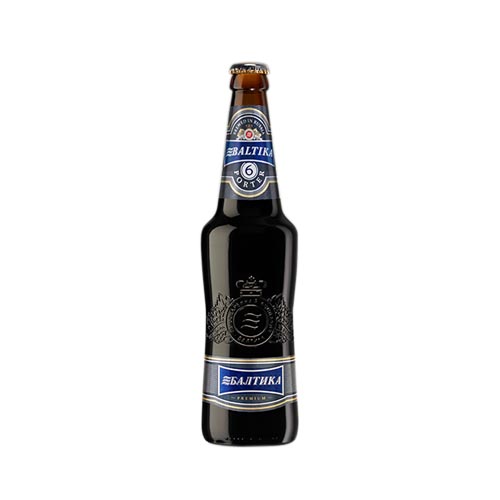 The traditional Baltika 6 Porter is brewed according to old English recipes from elite hops and special yeast.

The Baltika 6 Porter beer was designed and launched in production in 1994. This traditional dark beer is brewed according to old English recipes. The elite hops, special yeast, purest water and high skill of the brewers are a guarantee of the popularity of the Baltika Porter. Baltika Breweries makes this beer using the best kinds of dark and pale malt. All this ensures the unrivalled taste of the Porter that was appreciated not only by Russian consumers: this beer is exported to 30 countries around the world.

In 2004, 2005 and 2006 the Baltika 6 Porter won the silver medals of one of the most prestigious professional tasting contests: The European Beer Star Awards. In 2007 the brand was awarded a silver medal in the category of the Low Fermentation Beer with the Alcohol Content of more than 6% at the tasting contest of the X Beer Festival in Helsinki. Twice, in 2007 and 2008, the Baltika Porter got silver medals in the Porter Packaged category at the Australian International Beer Awards contest. Besides, in 2008 the American Brewers’ Association marked the Baltika 6 beer with a silver medal.

At the end of July 2009 Baltika 6 Porter was officially acknowledged the world’s Best Porter. The Baltika 6 Porter is the only Russian beer that entered the catalogue of  ”Great Beer Guide: 500 Classic Brews” by the world-known writer and beer expert Michael Jackson (complete namesake of the American pop-performer). ”It is the flavor that makes these drinks great… Every time you raise the glass, there seem to be more flavor and aroma”, wrote the author about the great beer brands.

The Porter beer is a dark beer with a characteristic vinous savour and strong malt aroma. This beer is very nourishing and foaming with a considerable alcohol content of 4.5-9.5 % (more than 10% in some varieties). The availability of at least one dark beer brand in the assortment of a brewing company is an indicator of the high brewers’ skill.